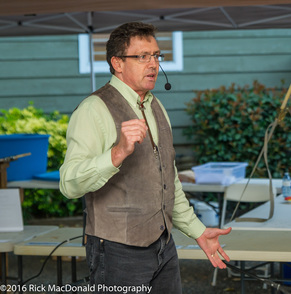 Dale Hopkins Magician & Storyteller
Dale was born in Winnipeg, Manitoba. He started practicing magic as a young teenager and spent his youth as a member of the Circle 7 Magic Club of the Society of American Magicians. It was an honour to study magic under the guidance of Bill Brace, James Cielen, Dean Gunnerson and other magical greats.

In 1988 he relocated to Calgary, Alberta where he performed for 20 years in front of a variety of audiences.  Playing to unique crowds at the Bowden Institute, The Lodge at Kananaskis, and the Alberta Children's Hospital.

Dale currently lives with his wife in St. Albert, AB. He is a teacher and continues to perform and perfect his craft in front of audiences of all ages.

With his magical philosophy, Dale weaves a magical tale while helping you to see the miracles of magic.

Dale is a magician and a storyteller, but most of all an entertainer. He will make you laugh, and he will enchant and mystify you with his magic tales.

Follow Dale into another time, put away your cell phones and computers.  Sit back, relax, and let me tell you a story.